Added by Jeff Pierson over 6 years ago. Updated about 4 years ago.

Doing this would allow limiting values that can be chosen for custom fields to only users who are in a specific department or who have a specific defined responsibility. The goal here would be to define a role such as Testers and a corresponding field called Designated Tester that would only allow selecting those with the Testers role.

It sound simple but there are likely going to be questions about whether or how to handle cases where users change roles after they have been assigned to such a custom field. In my particular case I'm not concerned with these cases too much since we don't anticipate frequent changes in roles and if the role limitation were only to affect the ability to assign new values to the field it would be a big improvement over the current behavior in which all users are shown to pick from.

Updated by Wim DePreter over 4 years ago

I don't know how long this already exists, but in redmine 3.2, you can select the roles that are listed for a custom issue field (type user): 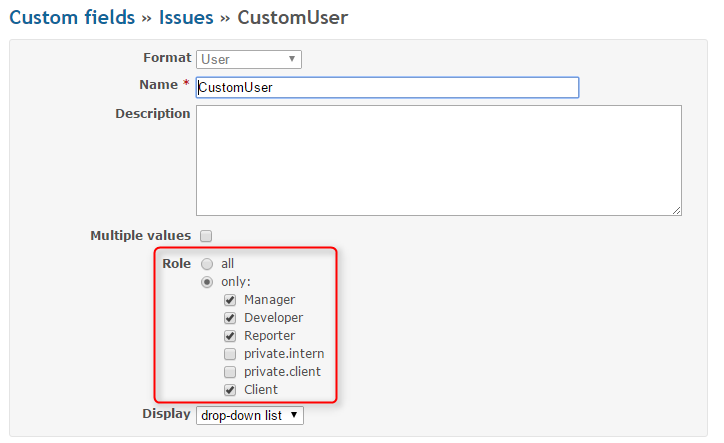 Updated by Toshi MARUYAMA about 4 years ago

Updated by Toshi MARUYAMA about 4 years ago