redmine 1.0.3.
A parent project is setup with several custom trackers with custom workflows. It's child project uses a completely individual tracker with its own workflow (not overlapping with any of its parent's).

When I right-click an issue in the issue list of the child project and select Status, it shows me all statuses from the parent project (as disabled) along with the ones for the current tracker/project. Much unneeded staff to scroll through.

Similar on the bulk edit screen: all statuses from parent project are listed as available, although the current project only has one tracker and one workflow with none of those statuses relevant.

Is it the same in the latest release? Any way to filter them more strictly? 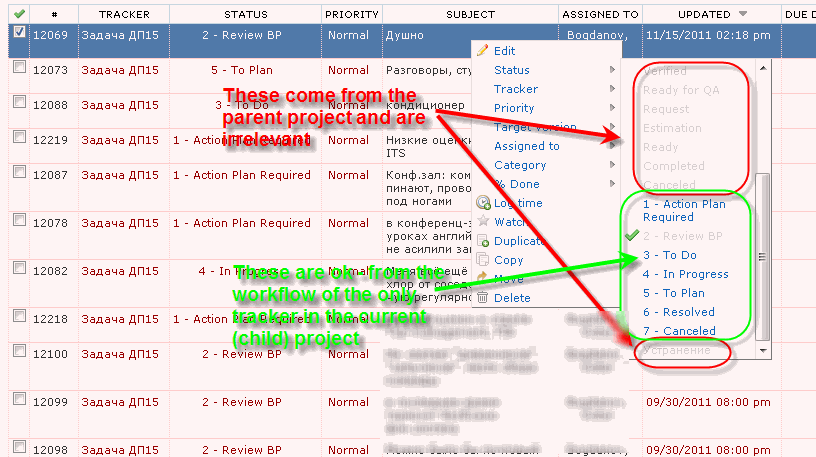 Only show statuses that can be applied to all issues on the bulk edit form (#10181).

Ok, for the issues list context menu it's at line 16 of /views/context_menus/issues.html.erb

For bulk edit (when you edit issues belonging to different trackers) the page is still somewhat misleading (not all field changes will apply to all issues); however, you can restrict the list of statuses to only really allowed values by replacing line 195 of app/controllers/issues_controller.rb

with an equivalent of what is done inside app/controllers/context_menus_controller.rb :

PS - sorry for necroposting for an ancient version.

Updated by Go MAEDA about 6 years ago