Users can assign a user/group which is not a member of current project, or even a user that doesn't exist

(I consider it as a bug, but it may be standard behaviour, which would be a really strange design decision)

I discovered this after receiving a report that the group which was assigned on an issue couldn't see it. This was normal, because the group was not a member of the related project. But I don't know how the issue could have been assigned to this group since only project members are assignable (even after investigating, I still don't know how it could have happened).

So I uninstalled all plugins on my integration environment, to avoid any plugin-related strange behaviour which could cause that. Then tried to replace the currently assigned user/group ID directly in HTML page (with Chrome "Inspect Element"), just to see if it was a client or server side problem. This led me to this bug report : 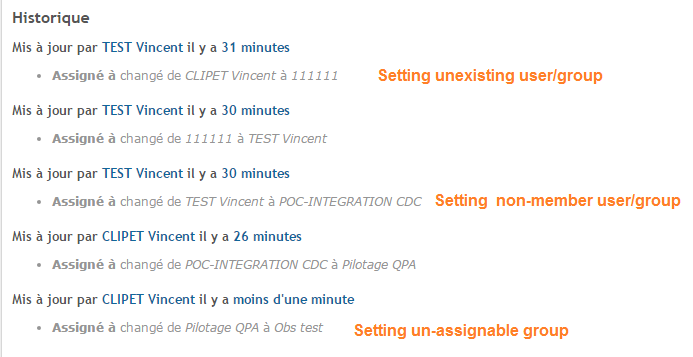 This doesn't seem to be the proper way it should be working.
It also allows user/group listing across the entire Redmine instance, which could be considered as a security threat.

Thank you for reporting.