Added by Mischa The Evil almost 12 years ago. Updated over 1 year ago.

I was just wondering if it would be useful to have total-columns inside the issue summary (issue_report) and the related issue_report detail-views.

Such a functionality would, for example, make it easier to look-up:

An example of what I'm talking about could look like: 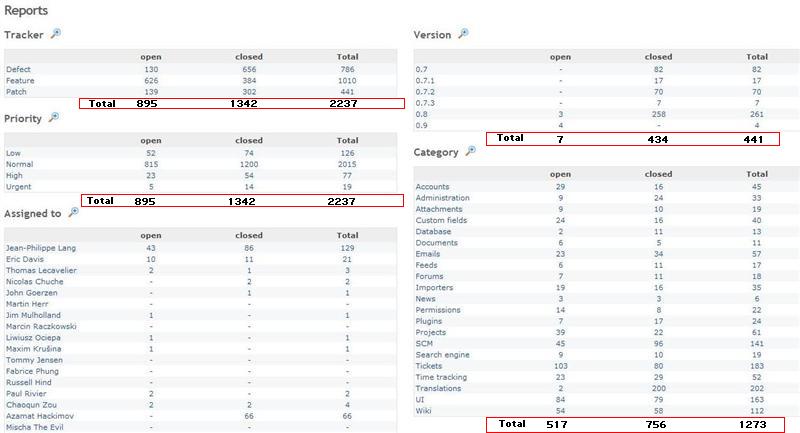 Updated by Mischa The Evil almost 12 years ago

Updated by Ewan Makepeace over 11 years ago

What is the difference between this patch and #691 ?

Updated by Mischa The Evil over 11 years ago

What is the difference between this patch and #691 ?

Almost identical. The patch from #691 also provides links on the totals which redirects to the issuelist with the required filters applied. This isn't something I use/require...
AFAICT this patch by Markus Knittig seems a bit more clean without hard-coded strings and so on...

I didn't found #691 before opening this issue... I'll relate them since they both implement it slightly different...

Updated by Mischa The Evil over 11 years ago

#6 Updated by Anonymous over 1 year ago

It could be a penalty to performance if there are too many versions, too many categories and etc as it introduces additional for loops. This IMHO would be a lot cheaper to do on the front end instead, but it would require correct classification of columns containing numbers.

P.S. possibly this ticket not really related to UI.