Added by Eric Davis about 12 years ago. Updated almost 7 years ago.

After reading Alexey Skor's forum post about the API versions, I think it would make 3rd party development easier if Redmine had a REST API method to find out what version of Redmine the server is running.

That way a client can check to see if the server supports the API requests it needs (e.g. 1.0+ has an issues API, 0.9 doesn't).

Updated by Jean-Baptiste Barth about 12 years ago

Agreed, it's a must-have.

I am stepping down from working on Redmine. If someone else is interesting in working on this issue, feel free to reassign it to them.

this would be a very useful feature for my application. I could add a "ping" button to "Redmine server" dialog and show if the server is
1) up and running
2) has REST API enabled
3) the server version info 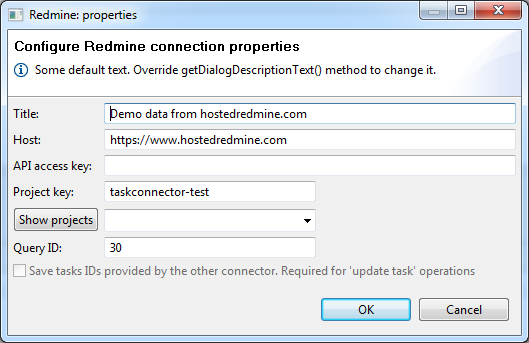 Updated by André Jonsson over 8 years ago

Or even better, an API to request what API resources are supported by the server.
Calling it would return a list similar to the table on the page Rest_api, primarily the "resource" and "status" columns.

Updated by Go MAEDA about 8 years ago

Displaying a version number was disabled because of security concerns since Redmine 0.8(#794). I think it should not be exposed through REST API for the same reason.

Updated by Nicolas Rodriguez over 7 years ago

I think it should not be exposed through REST API for the same reason.

Even after authentication via API token?

Redmine 3.x broke backward compatibility again - the date format used by it is different from Redmine 2.6.2:

one of our users submitted this bug report: https://github.com/taskadapter/redmine-java-api/pull/175

if we could query Redmine to see its version, we could pick the right date format instead of guessing... now we will have to check "are there 3 more digits after this and before that?"..

another (actually better!) option would be querying Redmine to see what date format it uses for long dates and short dates - because this is what the library actually cares about. I will submit this as a separate feature request.

another example: I see 'spent_hours' default value for new issues created through REST API is NULL for Redmine 3.0.0 and is equal to "0.0" for Redmine 2.6.2.
there is no way for the java api library to detect the Redmine version (well, unless we start parsing 'redmine/admin/info' HTML page, which is definitely not what we want to do).

Updated by Go MAEDA over 7 years ago

Updated by shadowbq - almost 7 years ago

Not the best route implementation, but will bridge the gap for people that dont want to wait another five years..

Updated by Go MAEDA about 2 years ago