I have developed ticket (issues) grouping plugin and tested it on current trunk.
There is a sample screenshot: 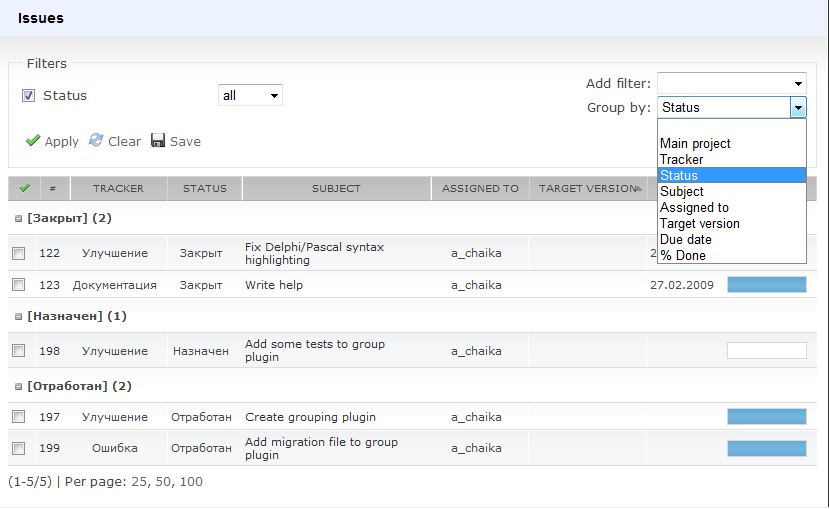 Maybe it will be usefull for someone. 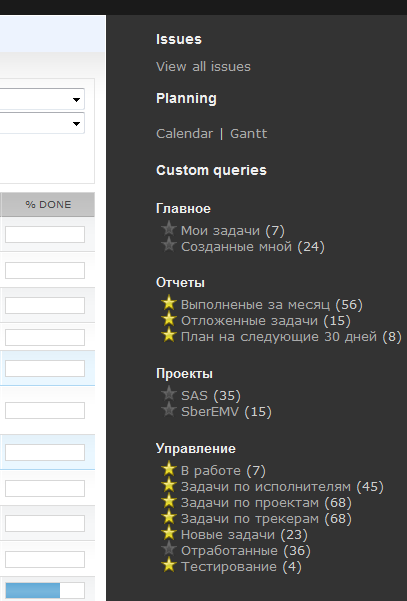 Great idea. It would be better if you didn't override the core Redmine controllers. If anything in them change, there's a chance the plugin will break.

Eric, as I understand the purpose of rails plugins is to demonstrate some functionality without modications of main project code.
I think that issues grouping and queries grouping in sidebar are good extensions (ideas etc.) for the base functionality of Redmine.
There are already some feature requests for such functionality (#2679), that can be solved.
How we can introduce them in the project main stream (trunk version)?
PS Sorry for my ugly english

Eric, as I understand the purpose of rails plugins is to demonstrate some functionality without modications of main project code.

I'm sorry. For that case of showing how the feature can be implemented, you are right. The majority of Redmine plugins are implemented as separate addons to Redmine that are maintained along with Redmine and I thought this was one of them.

How we can introduce them in the project main stream (trunk version)?

Best way would be to add the patches/plugins to an existing issue or to create a new issue using the Patch tracker. Then we can review it and see about applying the code to the core.

Please find, attached, the french language files for your plugin:

- For the config/locales folder (85 Bytes)

- For the config/locales folder (85 Bytes)

German translation for the plugins...

Can't install it - froze for a while on db migrate:

Last version of this plugin works with 0.9 (trunk) version of Redmine.
For 0.8.x branch try to use 0.0.2 version, it was developed and tested on Redmine 0.8.2.
I will check db migration and compatibility with 0.8.3 version.

Very nice plugin. I'm also interested to see if it can be installed in 0.8.3.

The plugin is very usefull, why isn't part of redmine core app?

The plugin is very usefull, why isn't part of redmine core app?

Now its a part of redmine core since r2696

I have published this plugin at http://github.com/Ubik/redmine_issues_group/tree/origin
In new version I implement Issues List as nested set with some outline view 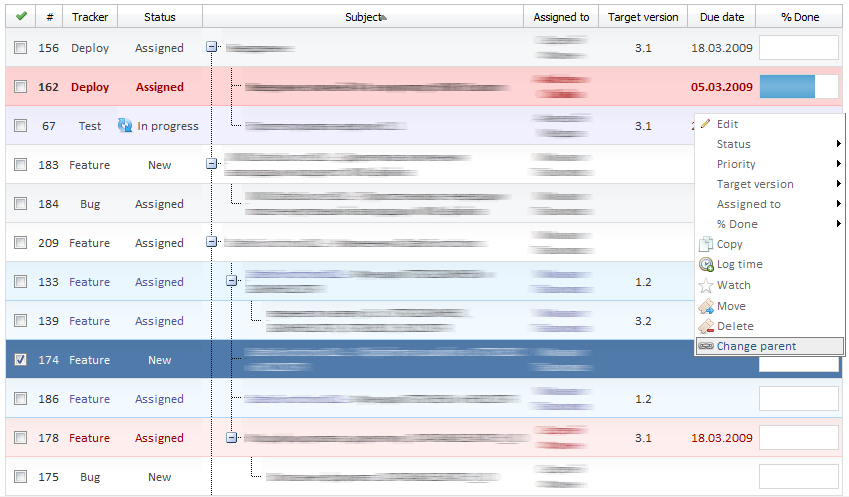 I have published this plugin at http://github.com/Ubik/redmine_issues_group/tree/origin

I can't check it out:
warning: remote HEAD refers to nonexistent ref, unable to checkout.
The default branch on GitHub is master, if your use something differently (like origin) you need to change this in the admin menu...

A workaround is to track the remote branch orgin/orign...

The problem is within issue model it already has method move_to, that implemented in awesome_nested_set.
I have patched my awesome_nested_set (rename 'move_to' method to 'move_to_sub' or something like this), but it's not good solution. Maybe some kind of 'alias_method' will be better, or patch to awesome_nested_set, I will try to fix it.

Is the last version of your plugin also merged with the core of redmine ?

RE: Ticket grouping plugin - Added by Mischa The Evil almost 14 years ago

Is the last version of your plugin also merged with the core of redmine ?

in last version of plugin i have exception in ticket list

this was happened in

The first exception is because of changes that have made in r2694: http://www.redmine.org/projects/redmine/repository/revisions/2694/diff/trunk/app/views/issues/_list.rhtml
Its need to change css_issue_classes(issue) to issue.css_classes.
The second exception is raised when you try to change parent for list of issues to some subissue of them.
I will correct both errors in next revision.