Show parent projects when filtering in the project jump box

Added by Anders Thomsen almost 4 years ago. Updated over 3 years ago. 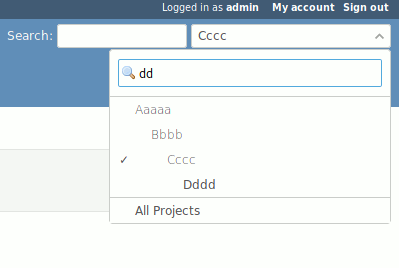 This solves a problem when having several projects with identical or similar names and project hierarchy is used to distinguish between them. E.g. when using one parent project as a container for business projects and another for the software development part of same project.

Also included is a related patch that marks the current project.

It is an interesting improvement.

I tried out the patch. But parent projects were displayed in not grey but black. And the checkmark for the current project was not displayed even after applying the patch 0002-Mark-current-project-when-filtering-project-jump-box.patch.

Could you check the patch again? My browsers are Firefox and Chrome for Mac.

The original patch uses on font-weight to grey out the non-matched parent nodes. This relies on the used font to provide the font-style which often it does not. Just realised this as I tested on Windows.

As for not marking the currently selected project, I'm not sure what causes this. I have just copied the functionality from the existing logic that marks the current project on the first page load (i.e. not filtering). Does that work for you?

I like the idea of the patch, but I'm worried about the proposed implementation that retrieves every time all the projects visible to the user (ignoring the q parameter). That means more time required to return the project searched by the user on instances with a lot of projects.

The change about I speak is the following one:

Maybe is it enough to show only the parent project? If not, at least we should confirm the proposed change with Jean-Philippe.

Updated by Jean-Philippe Lang over 3 years ago